The GOP is fated by its own history to either tolerate or support the worst in America's character.

From Isolationism and America First, to McCarthy and Strom Thurmond, to saber rattling and voter suppression, to its tolerance, if not support, of the current WH occupant, the GOP is a denizen of the slough.

The GOP has no moral substance whatsoever, so it clings to the superficialities of morality, religion, capitalism and patriotism, but its decayed moral fiber can neither lead the nation nor posit a vision for the Free World.

The GOP has a long and sordid history, with only the rarest occurrence of real leaders, like Senator Arthur Vandenberg whose bipartisanship crafted the Marshall Plan, the United Nations and NATO. When others would have divided the nation, Vandenberg built bridges and crafted compromise. 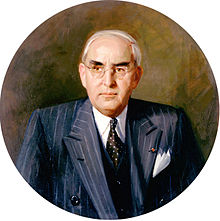 "This too shall pass" said the plaque on Vandenberg's desk, and so it shall; but I can only hope for limited damage in our current situation, and that women and men of vision, moral clarity, with the courage of justice, will emerge to lead our nation aright.
Posted by castaway at 9:11 AM No comments: